You are here: Home / Blog / HTC Vive Exploration – Have An Amazing Gaming Experience

Electronic gadgets play a very important role in not only making life easy for the people but also entertaining to a great extent. HTC Vive Exploration headset for virtual reality has become very popular among the users. Kids and Adults both are in love with devices that have range of attributes designed to capture their attention to a great extent. Manufacturers have introduced numerous attributes in HTC vice to deliver exemplary performance. 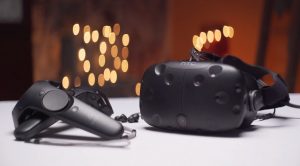 Let’s find out what the gadget is all about:

HTC vive when connected with computer displaying Intel Core processor i5 delivers exemplary performance as far as virtual reality functions are concerned. In comparison to its peers such as Google Card board and the Samsung Gear VR, the device is miles ahead. Currently the head gear provides virtual reality experience with around the edge games but in future versions the quality will definitely undergo immense improvement.

You can check the device in action by understanding the principle on which it operates. It is extremely easy to use and can be set up on a fly. Other virtual reality devices use a single camera to track the head as well as extremities however Vive deploys two base stations to accomplish the task. Both the components are attached to the wall mounts to monitor the movements in an impeccable manner.

What is inside the hood?

Peeking into the virtual reality gadget, you will find dual controllers along with two base stations. Moreover, you can also find the cloth to clean the lenses as dust particles will affect the resolution. Stations do not track images but the divots positioned over the top of the controllers. Large number of dots is present on the controllers and the helmets to deliver startling results to the users in the form of crystal clear images. 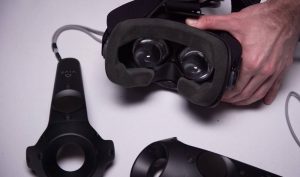 Inside the head gear, you would find changing cords for the controllers and the hub that acts as an interface between headset and the PC. It is an important device that makes the virtual reality an experience to remember.

Each gadget is bundled with three games namely Job simulator, fantastic contraption and the Lab as they are very popular among the seasoned gamers. Manufacturer has included the set up application to make the whole process easy and hassle free for the users. Installation would go a long way in delivering sterling results as the games are seamlessly supported by the gadget.

The designers have ensured that after the setting up procedure, HTC Vive Exploration acts like a plug in and play device. Mapping of the room allows the users to roam around in the digital space without any problem. It is to be noted that the virtual reality on Vive is far more rich and immersive than the ones available on other devices. Faint blue walls can be seen while playing the games signifying the boundaries of the gaming space.

Comfortable for the users 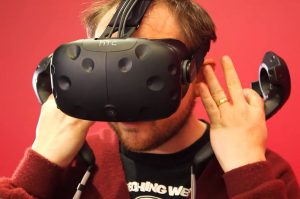 Headset is provided iron clad support by the trio of the VELVO straps that cover the top and the side edges. They extend to the back to create a cradle on the head so that the device doesn’t knock off balance to the left or right. Proper positioning is essential to relish the game of virtual reality while sitting comfortably with the head gear in chair.

Cords are connected to the small hub which is attached to the visor and the computer. One of the best attributes of the gadget is that a single 15 Foot cable is necessary to ensure that the game can be played in the virtual reality world. In previous versions, three separate wires were needed to accomplish the task causing discomfort to the users. Once the cord is connected to the hub, a wire is attached to the USB port of the computer. HTC vive has provided immense flexibility to the users as they can use their own head phones. You can buy the gadgets that have extra padding to avoid hurting the ears. 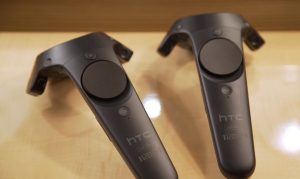 Quality of the controllers is a class apart when compared to other play stations. Each component has a clickable keypad providing immense help to the developers. Moreover, presence of dual triggers makes the interface more refined for the users. Naysayers might say that the size of the controllers is bigger than that of a play station; it is still far ahead of other in terms of capabilities. Bestowed with two buttons namely start and connect, the gadget is extremely easy to use. In addition, two side buttons are also available so that they could be pushed with the ring finger.