The Alpha cool company is known for creating a range of water blocks to protect graphics card processors and motherboards. It has developed lots of cooling solutions for the devices available in the market. In the present scenario, the industry is moving towards all in one liquid cooler that can be expanded.

Since all companies are engaged in producing the similar device, Alpha cool has joined the bandwagon with an entirely new offering called Eisbaer 240mm. In order to know whether the new entrant is worth buying, let’s analyze each parameter in detail. 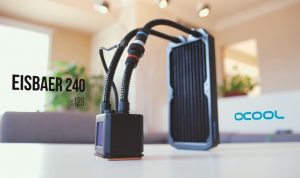 It comprises of a liquid CPU cooler accompanied by an integrated pump and CPU block that can be expanded as well as customized. In addition, the device is equipped with quick lock up coupling that can be easily used with GPX-Pro GPU AIO product. Apart from the amazing design features, the product comes with numerous bells and whistle that we would analyze in the next paragraph:

Eisbaer is delivered in a large box covering with 33.3cm length and 24 cm width. On the front face of the package, detailed information about the supported sockets is provided to the users. On the rear side similar picture of the Alpha cool logo can be seen without any difference. 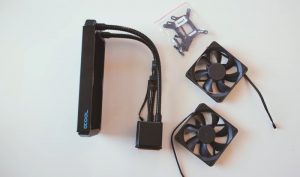 After opening the box, you will find the components packed with cardboard and placed on the foam base. Numerous sockets are provided with the Eisbaer 240mm. 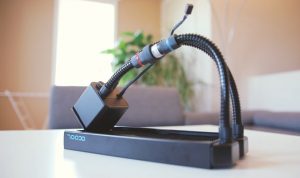 Back plate should then be pasted on the motherboard to secure the fittings for seamless functionality. Thereafter, one should install the fans with high power and attach them to the CPU fan headers along with the pump. With all the components connected, operating the device becomes an absolute breeze.

Therefore due to simplistic installation, Eisbaer 240mm deserves a rating of 9 on a scale of 10.

Although the product appears to be devoid of numerous bells and whistles, it still looks amazing with clean black color that can get well with any combination. In addition with AIO, one doesn’t have to stress about the huge heat sink object attached to the motherboard.

Clearance of the AIO cooler is second to none as the socket is relatively free from any obstruction and the tubes are at an arm’s length from the graphics card that is located in the ITX system. As a result, the device doesn’t impact the performance of the computer system.

The testing process on Eisbaer is performed at the room temperature of 24-degree centigrade. Coolers are analyzed with Turbo and EIST processor to reduce the clock speed below 1.6 GHZ when idle and increase it to the top speed while over clocking. 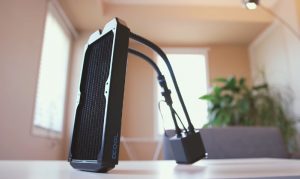 During the tests, it was found out that with Eisbaer, the CPU temperature however around 24 degrees centigrade and during the OC idle mode, it displayed the same.

As far the load temperature in the stock wprime is concerned, 56-degree temperature was registered which is lower than that of pure rock and CM hyper water blocks. Eisbaer delivers sterling performance under the multi-threaded load with a temperature of 70-degree centigrade.

When the fan speed is 25% of the peak value the noise level of the product 35 DBA while at the 100% limit, it is 46 DBA which is better than Corsair H80iGT and Swiftech brands. In short, the device works quietly to meet the requirements and the specifications of the users.

Eisbaer delivers value for money performance to the customers. Compared to Swiftech it provides 100% performance without any problem.

After checking the product on all parameters, it can be safely said that Eisbaer has exceptional clearance backed by solid performance. The noise is not too big even when the world load is higher. Plain styling without flashy design is another plus that goes into the favor of the product.

After installation, you will find that your CPU is cool without any vibration of the fan. Compared to other expensive products available in the market, it offers value for money in terms of pricing. In addition, it is energy efficient with the capability to run silently at only 7V of power without any problem.