Smart phones have become integral parts of our lives but imagine a situation if the cell tower goes for a toss and you do not have the GPRS connectivity to hook on to the internet. Technological evolution has resulted in the creation of different apps that can mimic the functionalities of the walkie-talkie on the Android smart phone. All you can do is to download the application and use them as and when required. In spite of no connectivity or the internet, they can work by piggy backing on the Bluetooth technology of the smart phones.

One of the major advantages of installing the apps is that you can easily send text messages to the people who are in the vicinity of the sender. After the installation is complete, the app would send an access code in the form of text messages to the phone. The code should be entered into the proper area before proceeding ahead with the messages. 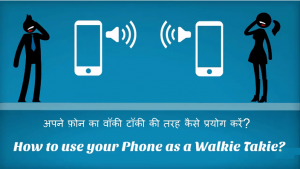 The sending and receiving of the message through the chat based walkie-talkie app is simple and would go a long way in seamlessly transmitting the information. In order to send the messages, you should browse the contacts and select the friends with whom you want to chat. The message can be send to only those people who have the particular application installed on their Android phone.

Many push to talk apps can transform the phone into a high performance walkie-talkie without any hassles. Using the apps, one can initiate group and one to one communication. Straight communication capability is provided to the users who are using the apps. The transmission of voice depends on the extent of the connectivity either through the blue tooth or the internet. The apps are very simple to us. Not only you can talk but also share text messages, images and videos. They can be installed on the Android phones and have backward compatibility with the older versions of the Operating system.

The apps are available under the standard and the premium plan to the users. In order to download, visit the Google play store and install them on the device. You can record the voice on the chat by pressing the record button and speaking on the microphone of the gadget. App ensures secured communication whether you are sending voice message or sharing the images with friends. Using the standard plan only 15 users can chat however the premium version can accommodate more than 500 users. Walkie-talkie apps on android exchange information using the standard SSL encryption unlike the two way radio devices.

If you want to forward a message using the app, select the forward option from the drop down menu of the application and search the recipient contacts. Due to simple user interface, even a layman can perform the task quickly and effectively.

To turn the device into walkie-talkie in case of no signal, install the specific app not only on your phone but also those to whom you would be communicating. The blue tooth application on the smart phone kicks in and provides seamless connectivity to all the users who want to share messages and even videos.  Within minutes, the users will be switching from the GSM to two way radio technology. Data transfer among the people who are sharing the app will not incur any cost as compared to the ones using the internet connection. When you are launching the application, it won’t ask you to create an account but only the nickname will suffice. Once identified, one can logon and access the numerous features of the walkie-talkie apps such as ringtones, emoji and many more.