You are here: Home / Blog / Understanding the Work of Wireless Walkie-Talkie

Compact phones working on wireless technology has become an essential part of the home as well as business. Cell phones are also in vogue but they become redundant once the network is out of order. Vintage walkie-talkies come into play as they are small and could be carried almost anywhere be it the desert or the Mount Everest.

Coupled with microphone, antennae and speaker, they are a force to reckon with crystal clear voice signals without distortion. Adjacent placement of the speaker and microphone ensure loud voice signals for the users and their groups. 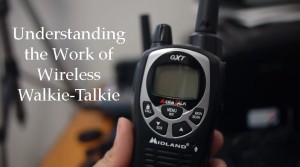 Walkie-talkie is built on transceivers that are perfectly capable to send and receive messages. In a way, the gadget supports half duplex channel where in only one signal can be transmitted anytime. It is a far cry from the full duplex cell phone communication system allowing users to talk simultaneously without interruptions. Obviously, there are some tradeoffs between the two devices however the utility of the walkie-talkie cannot be overlooked.

The gadget works with the help of the push to talk system in which the person has to press the button to transmit audio signal and release it to listen to the voice on the other side. You will be spared from the embarrassment of dialing the numbers and to top it off walkie-talkie would still work in the event of natural disasters when the cell phone towers get destroyed. Modern business is bolstered by the use of radios as employees can easily communicate without any problem indoors or outdoors.

Walkie-talkies transform the voice into radio signals for transmission over long distances at the speed of light. They are received by the radios located within the range or in the same frequency band. Modern gadgets come with lots of channels for communication; therefore it is the duty of the users to find the correct frequency for transmission of the signals.

Frequency allocation is the primary responsibility of the government. Generally, family radio service and general mobile radio services(GMRS) use the frequency band from 450MHz to 470 MHz. Inundation of the signals clog the limited frequency band and cause disturbances to the voice signals. All walkie-talkies are bundled with features to block the attenuation and deliver crystal clear signals to the users. GMRS devices are powerful as they can inject a power of 5 watts and can easily combine with repeaters to boost the audio signals. FRS (family radio service) radio operates with less power and the audio signals are not very clear. Adding to the woes of the customer, it is lower range of the radio making it unfit for the outdoor communication.

The only possible way to eliminate congestion in GMRS channels is to apply for the license however each country has its own frequency band that is deemed legal for communication. People should verify with authorities for using the channel before proceeding with data transmission.

No matter what manufactures claim about the range of the walkie-talkie, they all meet their match when encountering impediments such as building. The so called 32 km limit can reduce to several feet within a matter of second. In addition to the obstruction, you should also follow the rules of conversation while communicating with the gadget. Since it is a one way transmission of voice, you should say over and out to indicate the recipient that you are done with conversation part and he or she can start talking. Modern gadgets have a beep tone that gets activated once the person has stopped speaking.

To prevent interference from the walkie-talkies in the same frequency band, use the DCS or digital coding squelch system that attaches a pattern to each voice signal for transmission. Therefore, you will listen to only those conversations belonging to the same group. Another functionality of the walkie-talkie is the storage option that allows people to play back messages they have missed in the past. Radio transmitters are water resistant and boast of durability that allows them to survive under any circumstance.